HOUSTON (Aug. 20, 2012):  Mitt Romney’s selection of radical right-wing Congressman Paul Ryan (R-WI) as his vice-presidential running mate makes it clear that a Romney Administration would be for the wealthiest American, for the dismantling of Medicare and other social safety nets, and for more of the failed policies that led to our current recession and high unemployment. Local Congressman John Culberson has supported his Tea Party colleague 95% of the time, including voting twice for his devastating budget. [1]

James Cargas, Democratic candidate for the U.S. Congress, 7th District, welcomes the debate on which candidate will actually protect Medicare and which taxpayers are desperate for tax relief, by stating, “Congressmen Paul Ryan and John Culberson have repackaged trickle-down economics of the 1980s.  This time the House Republicans are paying for deeper tax cuts to the top 1% with a radical reduction to Medicare, especially for persons under age 55.  Culberson, a Tea Party Republican, has voted twice for the Ryan budget.”

Even more striking, though, is how the Ryan budget would structure income taxes.  It would reduce taxes for the wealthiest Americans to 25%, while increasing taxes for those in the lower 80% of the income bracket: 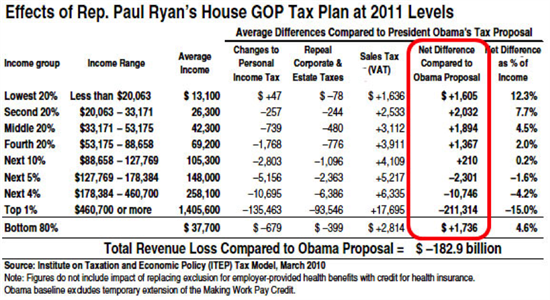 Cargas further commented, “I believe we need to balance the federal budget. However, we should not do it by dismantling vital safety nets like Medicare and Social Security and handing out a generous 15% tax cut to the top 1% as the Ryan/Culberson Budget proposes.  Instead, we need to return to the economics of our last balanced budget from President Clinton, when those more fortunate were asked to pay their fair share, and our social safety nets were preserved.”

The voters will have a clear choice this November.  Whether to move forward to a more equitable America that continues to emerge from its economic quagmire, or to move backwards to an America where the wealthy get even more benefits while more burdens are placed on middle and lower income Americans.

It is clear that the Republican Party is running to appease the wealthiest one percent in this country (who are also the ones funding Super PACs) and doing so against the middle and lower classes.  There is a reason Congress has the lowest approval rating in history – the reason is extremists like John Culberson.

James Cargas will represent all of Houston.  He will protect Medicare and Social Security, and he will work with the White House and Senate to once again balance the federal budget.

James Cargas offers substantial public service experience.  He has served as a Congressional aide, law clerk at the Federal Energy Regulatory Commission, a Clinton White House staffer, and a special assistant in the U.S. Department of Energy under Secretary Bill Richardson.  He is currently the Senior Assistant City Attorney for Energy for the City of Houston.