NEW YORK – It is not a common thing for real experts on the country’s critical issues to get elected to Congress. James Cargas is a Democrat running in Texas’ 7th Congressional district. He was born and raised in Detroit, MI so he knows cars and the auto industry, but his experience includes working for Bill Clinton’s Secretary of Energy Bill Richardson.

In an earlier interview Cargas told TNH the Tea Party’s oversimplification of issues and obstinacy prompted him to challenge incumbent Republican John Culberson. Now TNH will tap some of his expertise on a set of issues that have yet to be addressed in detail this campaign season.

“The Republican approach regardless of past administrations and current members of Congress has been ‘drill baby, drill.’ It’s very myopic,” said Cargas, who is one of the founders of a group called the oil patch democrats, formed about 10 years ago during the Bush administration. They say the United States should have a very diverse energy portfolio and they sought alternatives to drill-baby-drill mentality.

“I call it realistic energy policy,” but he agree with President Obama when he says “my policy is all of the above,” including responsible drilling.

When he worked for Richardson, they focused at the ultra-deep waters of the Gulf of Mexico as the next energy frontier, down at 10-15,000 feet. But technological progress keeps shifting the line. “There are people in Houston developing sub-sea platforms where the drilling is done remotely so you are no longer tied in to the surface water. Once you get to that level of sophistication, water depth doesn’t matter – except for the water pressure which is incredible.”

He agreed that the technology has relevance for Greece, which has much of its potential hydrocarbon wealth buried in deep underwater gorges.

He is not just a good son of Detroit when he is expressing the “realistic” part of his philosophy. “As long as there are internal combustion engine vehicles on the road, we will need oil.” He said it will take 20 years to transition to electric cars, so the United States still needs new sources of oil.

Cargas believes it is important for government officials and citizens to appreciate recent development in the natural gas field. “It has been a wonderful boom because it has come up so plentiful and so cheap, and pretty much domestic.” Natural gas facilities have replaced some of the dirtier coal plants. “The Coal industry in dishonestly blaming the EPA for its downturn, but it’s the market pricing the gas. Coal can no longer compete with them,” he said.

The other positive sign in the energy field is that renewable energy facilities are being scaled up. He served on the President’s Council on Sustainable Development 12 years ago when “solar and wind power, and hybrid vehicles were a tough sell, but now they are deployed all over the place.”

Another good thing about gas-fired generators is that they can step in quickly when the sun isn’t shining and wind is not blowing. “So natural gas in combination with renewable energy sources is a beautiful combination, Cargas said.

The related issue of Hydraulic fracturing, “fracking,” touches on the wider issue of proper commercial regulation since he believes proper controls of the companies involved will limit the dangers posed by the technology. 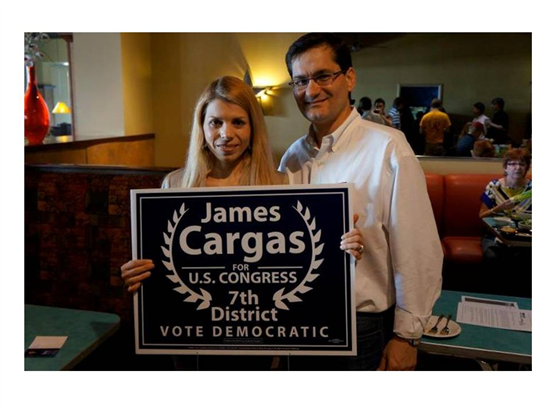 James and Dorina Cargas smile on the campaign trail.

Fracking extracts gas through the injection of fluid into source rocks. Cargas said there are two issues: the contamination of groundwater and wasting fresh water. People have focused on the first, but he said if “a company does a good cement job and seals off the well, it will not leak into the groundwater, but it is difficult for a regulator to know whether it is being done correctly. The solution is to make sure the companies put up bonds and hold them responsible when they mess up. They can get insurance policies so that when they go bankrupt, there is money to fix what happens.”

Cargas thinks the bigger issue is that millions of gallons of water are being pumped into the ground. “A good operator will use waste water. A bad operator uses fresh drinking water.”

He said there are big philosophical differences among political parties on the broader issue of regulations, which he believes are necessary and beneficial to the country. Broadly speaking, “regulations are designed to prevent injury and protect consumers. Look at the FDA for example. If they were not there, more people would get sick or injured, at which point plaintiff lawyers come in an assess damages. But litigation doesn’t cure anybody, it just gives them a bunch of money to help pay medical bills and live their miserable life, assuming they live, or something for their heirs. It’s better to prevent the injuries and put the plaintiff lawyers out of work.”

Another frustrating thing is that “Congress has a tendency to pass a new law, regulation, new standard, and then only supply the FDA with three inspectors to review the entire meat supply. There is no enforcement.”

He acknowledges, however that most businesses are well-run. “They are doing the right thing, following the law. There are a few bad apples out there that produce the film footage and stories. And it’s not fair to the good operators that the bad operators have better profit margins.”

The parties also differ starkly about global warming. “Most people accept the fact that global warming exists. You can argue about the degree of the danger and what to do about it. But what we tried to stress in the Clinton administration is that every solution to global warming requires we become more energy efficient. When you do that, you increase your profit margin too. It has taken a decade but industry finally gets it. It’s win-win. It just makes sense to pollute less and be more efficient, to run our societies and businesses better.”

But not everyone is one board. He told TNH the Texas Republican party had a plank in their platform “that they are against critical thinking being taught in schools.“ That provoked laughter, but the son of Socrates and attorney from Detroit is not amused.

The Cargas-Culberson race also has local issues. He believes ideology has caused Culberson to vote against the best interests of his constituents, saying that Culberson “rails against earmarks and pork, but if it helps your town… it’s not pork, its good sense.” Culberson voted to reject funds for the Houston Metro System. “Today the ridership is two times what they thought it would be…There are plans to expand it into a system that will get cars off the road and create mobility for people who can’t afford cars.”

Culberson is “dedicated to the automobile,” but Cargas says “this is not Los Angeles. We are not going to keep widening our highways,” as Houston grow at at fast pace. “We need serious public transportation.”

Houston is also proud to be the home of the Texas Medical Center. That huge, world class institution depends on government grants from agencies like NIH to pursue basic research, but for the past ten years research has been flat and Culberson has voted against research funding time and time again. Cargas’ wife Dorina is a neuroscientist at the Baylor college of medicine, where “they are still laying people off and closing down labs…threatening good, knowledge-based jobs,” and hurting employees and industry Cargas said.

THE PATH TO THE CAMPAIGN TRAIL

Cargas’s path to November is fairly common. An Eagle Scout eager to take his ethos of community service to Washington, he worked as a student intern on Capitol Hill. After graduating from the University of Michigan he returned to the U.S. House of Representatives as a Press Secretary to a Michigan Democrat, graduated from The American University’s Washington College of Law, and worked in a large law firm and later as environmental counsel to a major interstate pipeline company before joining the Clinton/Gore White House.

Cargas and his wife just celebrated their fifth wedding anniversary. “We still feel like newlyweds. It’s hard to believe five years have gone by.” They attend the Church of the Annunciation in Houston, TX.

His father passed away 11 years ago and his mother lives in the Detroit area. His sister Victoria lives in Kalamazoo, MI with her husband John. She was ranked 7th in American for pairs figure skating and taught skating in the past.

Their family attended the Church of the Assumption, the largest church in Detroit where Cargas participated in GOYA, served in the altar, and volunteered for the Greek festival. His father, Pericles (“Perry”), who was also born in Detroit, was a parish councilor for many years and his mother Helen, who is from Lansing, MI, was active in the Philoptochos and spent a lot of time helping at the schools.