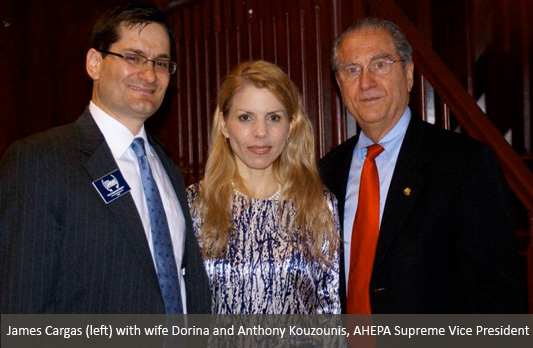 James Cargas’ first job out of college was being Deputy Press Secretary to Congressman David Bonior (D) of Michigan. Jim Wright (D) of Texas was Speaker of the House and Republicans controlled the White House.

“Democrats and Republicans had their differences, but we talked and worked hard to find where the consensus was,” Cargas told NEO. “That’s not happening today. It’s total gridlock with no meaningful communication, and somehow ‘compromise’ has become a bad word. This has to change,” Cargas continued.

James Cargas has decided to do something about Washington’s dysfunction by utilizing his political experience and running for Congress. He is the Democratic candidate for Texas’ 7th Congressional District in Houston. He wants to return to Congress and get it moving forward again, especially when it comes to energy policy.

Cargas grew up in the Detroit area and attended Assumption Greek Orthodox Church, which his grandfather helped found. His father owned several restaurants where he learned to cook and run a small business. The job with Bonior introduced Cargas to Washington D.C. where he subsequently attended law school at The American University and was very active in the Young Adult League.

While in law school, he worked for the Solicitor of the Federal Energy Regulatory Commission. The Chair was Martin Allday, a Texan, and the experience opened his eyes to how critical energy was to every aspect of the economy and society. “Chairman Allday was always quick to point out that nothing happens without energy,” he recalled.

After law school, Cargas worked in the private sector before joining the Clinton White House at the President’s Council on Sustainable Development. “We were promoting the economic benefits of solar and wind power, energy efficiency and more efficient technologies like hybrid engines. But, oil was around $20 a barrel, energy was cheap and it was a tough sell,” Cargas said. “Today, these technologies are everywhere.”

Cargas finished out the Clinton Administration working for Gov. Bill Richardson at the U.S. Department of Energy before moving to America’s Energy Capital – Houston. Today, he is the Senior Assistant City Attorney for Energy. Houston is the fourth largest city and the eighth largest purchaser of renewable energy in America. It also has the largest municipal fleet of hybrid vehicles in the nation. “It is very rewarding to be part of a team that has reduced total energy costs while meeting the needs of a city that grows by 200 people per day,” he pointed out with pride.

Cargas is married to Dr. Dorina Papageorgiou, a neuroscientist at the Baylor College of Medicine. “We met at the Houston Museum of Natural Science. A year later, I proposed there.”

While he is a third-generation Greek-American with roots in Tripoli and Amyclae, south of Sparti, Papageogiou came to America from Athens after graduating from The Arsakeio High School. She is a graduate of the University of Georgia, has a Masters degree from Johns Hopkins University, and a Doctoral degree from the University of Texas – M.D. Anderson Cancer Center. “I visited my sister in Houston where she was earning her Doctoral Degree in Molecular Cancer Biology, and was really impressed by the many opportunities this city has to offer, especially with the medical research opportunities at the Texas Medical Center.” She then moved to Houston and pursued a Doctoral degree in Biomedical Sciences from the University of Texas – The M.D. Anderson Cancer Center, and two postdoctoral fellowships at the Baylor College of Medicine. “At Baylor, I conduct research using real-time functional MRI (fMRI) neurofeedback. My research uses real-time fMRI neurofeedback technology to restore the vision of stroke or traumatic brain injury patients, including veterans who have sustained traumatic brain injuries from improvised explosive devices resulting in visual field deficits and even blindness,” she explained.

James and Dorina have been married six years, and are members of the Annunciation Greek Orthodox Cathedral. James is a member of AHEPA Chapter 29 and a member of Team Souvlaki during the Houston Greek Festival.

“As a fiscal conservative, I will give our economy, federal budget and job recovery my highest priorities in Congress,” Cargas pledged. “Clinton was the last president to balance the budget and it took him over six years. It may take this president longer, but he needs a Congress willing to do what is best for America and not just score political points. Beyond that, America looks to Houston for leadership on energy policy, and much of its talent and expertise is located in Houston’s Energy Corridor off Interstate 10 in District 7. I plan to dedicate myself to implementation of a national comprehensive energy policy. It’s a complex issue that has not been given the time and attention it deserves on Capitol Hill.”

“For example, wide-spread fracking has created a cheap and abundant supply of clean natural gas, which has, among other things, forced many higher-cost dirty coal plants to close. That’s good for the economy and environment. However, not all operators are being responsible and steps need to be taken to protect the integrity and volume of our clean water supplies. I welcome the challenge of continuing fracking in a responsible and transparent manner so we can enjoy its benefits without its detrimental environmental impact,” Cargas said.

The Houston Chronicle endorsed him in the primary saying, “James Cargas, seems excellently suited to reflect the district’s energy industry.”

Although Houston’s world class Texas Medical Center is not in the district, many of the employees, who work there call district 7 home. “Keeping America at the forefront of scientific discovery and innovation will be another one of my priorities in Congress,” Cargas assured NEO.

When asked about foreign policy, he lamented, “it is an embarrassment that Berlin has been reunited, Panama has its canal back, peace has come to a divided Ireland, but Cyprus remains militarized and divided. This is another challenge I plan to undertake in Congress with the existing Hellenic Caucus. There is a lot of work to be done on Capitol Hill,” Cargas concluded, “but being the son of a Greek restaurant owner, I know what work is, and welcome the challenges.”